Which E-Commerce Platform to Use?

WooCommerce and Shopify are two of the most popular ecommerce platforms now! 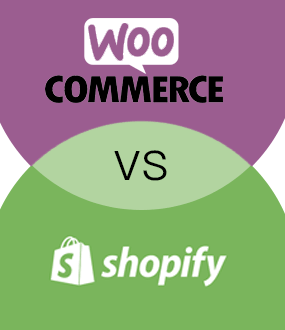 Shopify powers over 600,000 businesses, while WooCommerce claims to be the web’s “most popular ecommerce platform”. Fighting talk from our contenders.

But if you’re trying to choose between WooCommerce and Shopify, how do you know which one is better?

Well, it’s not really a question of which one is better. They’re both powerful, but markedly different options if you’re looking to sell online. The bottom line is, which one is right for you will depend on your personal circumstances.

Shopify is for you if you need an all-in-one-package. You can build and publish your own online store entirely through Shopify, and make use of its neat features and apps.

WooCommerce is for you if you already have a website. It’s a plugin that works with WordPress, and helps turn your website into an online store.

In this guide, we’ll show you how to decide if Shopify or WooCommerce is right for you. You’ll find out the key differences, and how they should influence your decision.

Our side-by-side comparison will compare WooCommerce and Shopify on:

Before we look at WooCommerce vs Shopify in more depth, we’ll cover the major pros and cons of each option. If you’re eager to get started, you can try both Shopify and WooCommerce for free via the links below: